skip to main | skip to sidebar

I have new remote-controlled FM-DX-receiver (4th) located by the sea in Virolahti, close to Russian border in SouthEast Finland. Russian side is visible over the sea. It is installed after 10 days DX-camp in Poronniemi, Virolahti in June. 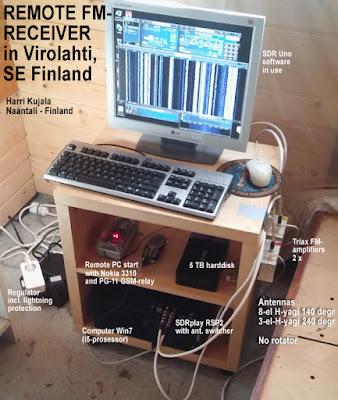 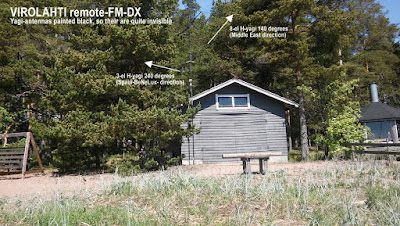 I have now 4 remote-controlled FM-DX-receivers 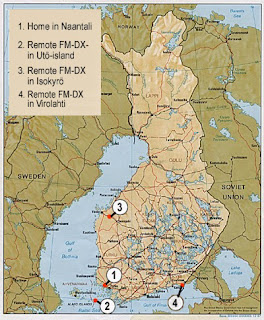 Newest remote-controlled FM-DX-receiver is in Virolahti (nr 4)
Posted by Harri Kujala at 19:26 No comments:

I installed again, in May 2015, remoted controlled FM-DX-equipment to distant Utö-island, SW Finland.
There is now 3 computers and 3 receivers tuneable. Some photos and videos here in Utö-blog:

Also I have  another remote-FM-DXin Mid-West-Finland. See below, previous text,
Posted by Harri Kujala at 23:27 3 comments:

I have built two new remote-controlled FM-DX-sites. There is a bigger installation in distant Utö-island in SW Finland. Presentation with photos is here: Remote FM-DX-Utö.

The other site is located in Isokyrö, close to Vaasa and Seinäjoki in midWest Finland. It is at my parents home
Photo below (click for bigger view). 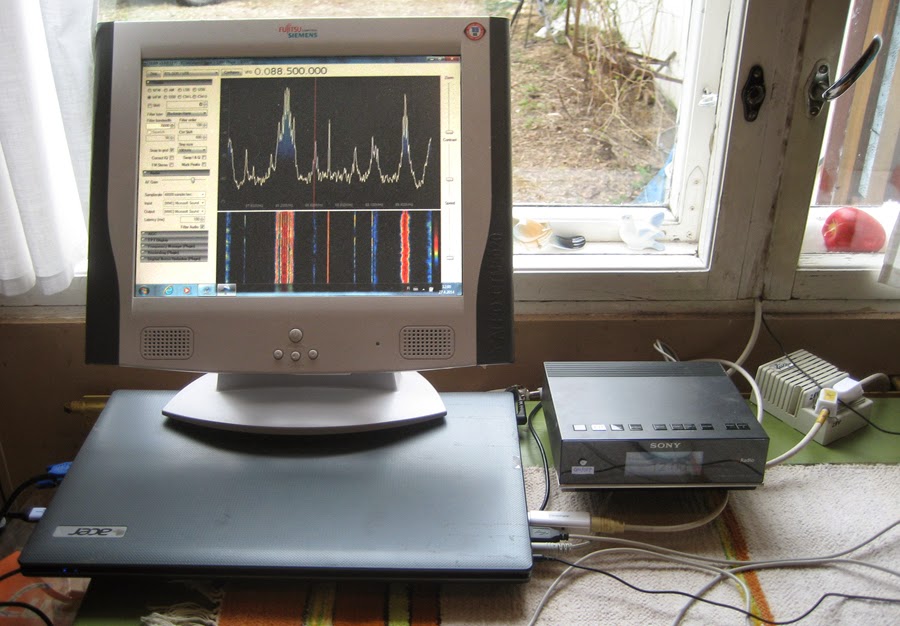 The equipment:
- Sony XDR-receiver (black box) controlled by computer with GTK-software
- Climax Digital DTV300 SDR-stick (on the PC-screen on 88.5 MHz) (White stick in the photo)
- Both receivers are connected to 5-element vertical yagi with Triax FM-amplfier (right)
- PC is connected to WLAN (1/1 Mb) with Teamviewer (incl. audio)
- Sony XDR audio is recorded to compter by Audacity 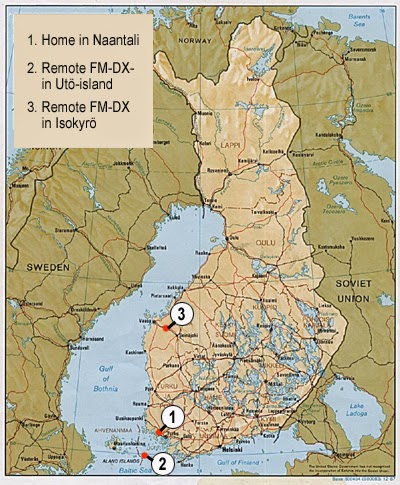 Posted by Harri Kujala at 10:06 No comments:

Almost one year since the last writing here!
During the last autumn I hunted Irish church stations on 27 MHz-band via F2. That took a lot of time from FM-DXing.

Since the autumn I started to plan remoted FM-DX-site to Utö-island, SW Finland. That means I have FM-receiver in far distant island and I tune it at home with PC. It works well altough we have many things to improve.

Read more of this unique setup from here: Remoted FM-DX-Utö
.
Posted by Harri Kujala at 22:28 2 comments:

I work for Radio Auran Aallot, Radio Melodia and Zoom FM (local commercial stations in Turku). I moved the stations from Turku city centrum to new Turun sanomat multimedia centrum in Artukainen (new city cetrum) on 28-29.7.2011. So, no time to monitor FM-band.
R.A.A. and Melodia moved, Zoom FM 93.4 (50 Watts) was closed down for 2-5 months to restart later with full 1 kW power on 99.0 MHz.

On Wednesday 27.7.2011 not much time to listen, but this was not a good day anyway. In the evening several Greeks (ERA-freq's) and Italian stations were up (Radio Alfa from MN on 88.8 MHz).

British 6 mb-STL-links id'ed first time
I got a new antenna for 6 meters amateur radio band (5 elements yagi to 45-55 MHz). It is made by OH1ZAA (Zaba), wellknown radioamateur from Pori, Finland.
The antenna works very well !!! I heard my first low power STL-links (=Studio-transmitter-links) from UK. My receiver is Realistic Pro 2006 (It is OK, and cheap as 2nd hand, but a nightmare to use).

On Sunday afternoon, after 11 days silence, FM-band opened to Middle East !! Very interesting opening to Lebanon, Syria, Israel and Iran !!
Several id's were clear but most of the stations remained unidentified. Arabic stations have much talk and music with rare station-id's.
After arabic some Turkey popped up, mainly from Istanbul and Zonguldak (close to Istanbul). Between Turkish stations some Ukrainan, Romanian and Bulgarian stations appeared with strong signals, and Moldova, too. MUF was over 100 MHz only several short moments. 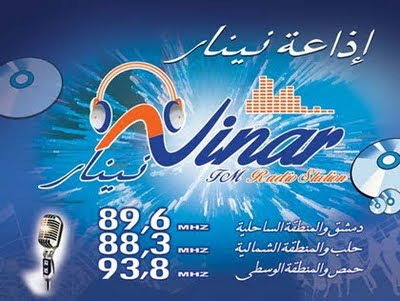 I rewind my recordins later but here some live-observations:

Today and yesterday I got nice reply from Radio Piú from Belluno, North Italy.
Belluno is very rare to receive here in Finland. I think the reason for that is the high mountains to Finland direction (North). However, luckily some transmitters find their ways to ionosphere beside mountains.
On the 13th of July I heard commercials to Belluno on 104.4 MHz. I found that this station could be Radio Piú. I wrote e-mail to the station, and they kindly confirmed my recording.

Some journalists at Radio Piú are also working for local newspaper, Il Gazzettino Belluno, so jornalist Mirko made an article of my distant reception. 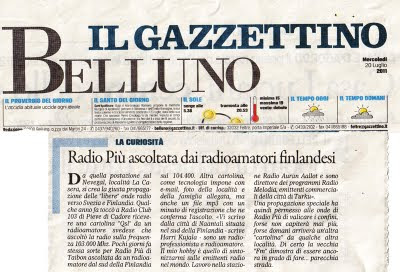 Posted by Harri Kujala at 21:07 No comments:

Wednesday 13.7.2011 bought rare signals from Sicily (Italy), not long lasting but anything is wellcome from southern Italy. Only two stations were heard from Sicily, but also some other new italians for me from the continent.
Before south Italy the band was full of Emilia Romagna-stations (Bologna, Modena, Ferrara, Parma etc). This are is the most common area to receive here since all time (from whole Europe). I think I have heard 95 % of possible stations from that area - and the rest are on very difficult frequencies.

Also some Balkan stations were up, but strangely only on a few sporadic frequencies. Radio Kosova (95.7 MHz) was also audible with RDS, quite rare lately. 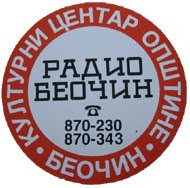 There were also opening on Friday 8.7.2011.
It was weak in the afternoon to Italy (40 min) and later in the evening to England and Ireland (20 minutes). Only several local stations were id'ed but nothing new for me.
Posted by Harri Kujala at 21:37 No comments:

Wednesday evening 6.7. bought the strongest opening so far this summer. Unfortunately the condition area was too large. At the same time whole Europe was coming up, only Turkey and UK were out! FM-stations from 25 countries at the same time! Lasted 4 hours (last 2 h were mostly Romania).

On most of the frequencies were 10-20 stations pushing up at the same time from almost every European country. This kind of situation gives white noise, dozens of stations are fighting on one frequency and the result is only noise (receiver's signal meters are peaking on highest level all the time but you hear only noise).

This opening was not the worst I have expereinced. There were still some high-power transmitters up and audible, but stations were changing all the time on one frequency and were very difficult to id. Less than 1 kW stations are mostly not audible because highpower transmitter from some other country blocks the channel.
Also RDS-signal-ID is useless during this. Usually during white noise-opening we do not get RDS-signals out because stations interferere each other so much. Strong signal from the same or adjacent channel blocks RDS-datas.

Posted by Harri Kujala at 12:28 No comments:

Very weak South Italy appeared around 14utc. Not much to log:

This is a blog for radio-observations from Harri Kujala, Naantali, Finland. You find here logs and highlights from my FM-DXing.
- Created 16.7.2007 - My equipment and sites 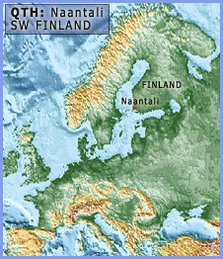